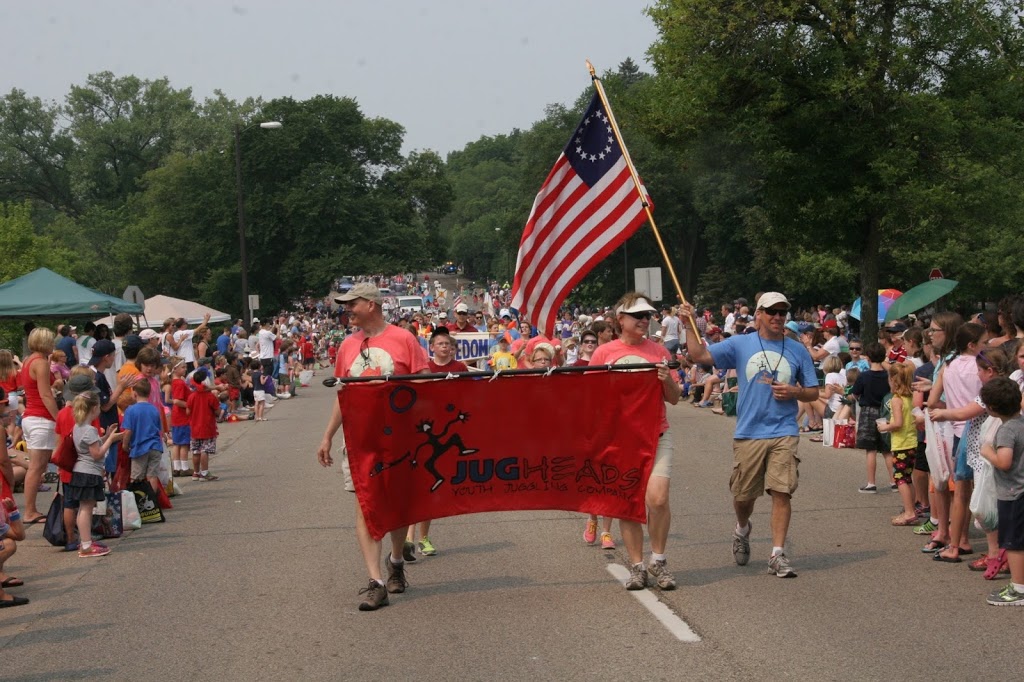 Introduction. I’ve never served in the military, held political office, or otherwise proven to be a super-patriot, but I’m a common man who loves our country nonetheless. The very existence of this one-of-a-kind entrepreneurial endeavor called JUGHEADS, LLC is a testament to several American ideals that I hold dear. That was why I chose red & blue as our JH colors in 1999, and it’s why I’m dedicating 2016 to a 10-part column series celebrating American ideals as reflected in this youth juggling company.

Part 1: Overview/Life.
At a recent Monday Rec. meeting, I covered four main topics: the Vikings, the MONDO Festival, our JJ18 routine, and introducing our newest member. As I wrapped up, I asked the club, “Which of my announcements was the most important?” Two astute middle schoolers replied it was the one regarding our new member. I agreed, saying that if it weren’t for the people that make up our club rosters, we’d have no company!

Expanding on this trivial example of a profound lesson, life was so important to our founding fathers that it headed up the list of selected rights in The Declaration of Independence: “We hold these truths to be self-evident, that all men are created equal, that they are endowed by their Creator with certain unalienable Rights, that among these are Life, Liberty and the pursuit of Happiness.” Life is first and foremost among our country’s ideals­—paired with its source, our Creator.

In many countries throughout history, and indeed today, life is cheap at best and expendable at worst. Billions of God’s image-bearers are consigned to unjust socioeconomic status ranging from serfdom to caste systems to aristocracy to slavery, with little or no hope of advancement in (or escape from) one’s societal standing. More on the ideal of Happiness (Opportunities) in March; for now, I assert that despite our country’s sins (past and present), we remain the best example of a nation that dignifies individual human lives regardless of power, position, or pedigree.

Irrespective of one’s political views on immigration, I believe that the nature of America’s founding, largely informed by Judeo-Christian values, makes ours a country to which people flee. We’re a beacon of hope for the “tired…poor…huddled masses yearning to be free” as inscribed on Lady Liberty. And while I strongly favor the vetting process and other steps preventing illegal and nefarious immigration, it’s awesome that the U.S. continues to be life-empowering for many millions. (More on Liberty in February.)

Our system of justice, at its best, is set up to protect the weak. Again, we have flaws, but considering world history and the dark places of the world, one need not reflect long to realize that the tired, poor, disabled, young, old, weak, and oppressed are (or should be) protected in America. (More on Justice in October.)

Like America, JH went from a set of upstart clubs (“colonies”) to an independent company (“nation”) as it developed from 1994-2005. I founded JH with the worldview that every child is created in God’s image and is inherently valuable regardless of age, ability, or so-called “quality of life.” America is one nation with 50 states and 322 million citizens; JH is one company with six clubs and 120 members. My sister’s church in Duluth has a motto: “Love God. Love people. Period.” That’s a celebration of life, and that’s what we try to do every day at JH—thanks in large part to the rights that have been championed in America since 1776.