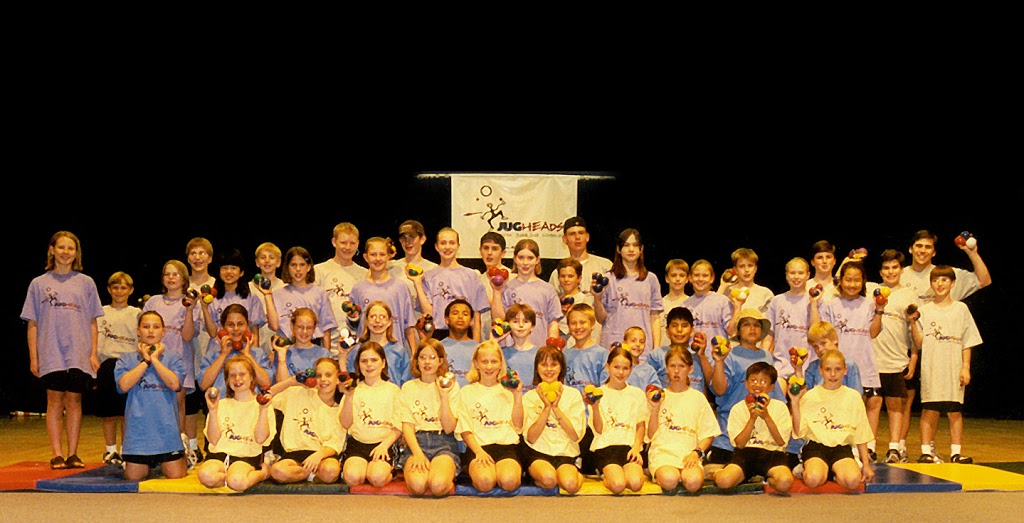 The cast of Juggle Jam 1

Venturing off on my own after 6.25 of childcare management was bittersweet. On the one hand, I had more workday flexibility and tuition percentage as a contractor of Edina Schools; on the other hand, I had no adult support staff (other than Wendy, working full-time as a graphic designer) and I was only beginning what proved to be a 4.5 year circumstantial depression arising from our infertility news in May 1998. So yes, I “loved my work” and was “living the dream,” but the struggles as a new small business owner seemed legion.

But I knew the show must go on! Despite my personal and professional challenges (including a 50% pay-cut when I left Wise Guys), I showed up Monday through Saturday at my seven weekly clubs. In Winter 1999, with sights set on our revamped show and our 4th IJA Festival trip, I led a campaign among my 50 jugglers to re-name our company. Our top three choices were “Edina Youth Juggling Company,” “Juggle Jam,” and something Wendy proposed: “Jugheads.” Whereas the older kids preferred the suburb-specific moniker, the younger Rec.-level kids overwhelmingly voted for “Jugheads,” and that name stuck. The 3rd option was adopted to re-name our show.

That April, I took Wendy to an all-star figure skating show for her 30th birthday. Right out of the gate, the pros appeared on the ice in solos and groups, performing samples of their most difficult and entertaining moves. Earlier that year, I had purchased a CD by The Brian Setzer Orchestra, and his big band revamping of “Rock This Town”especially grabbed my attention. With less than two months to go, I used that song to create our first Juggle Jam grand opener. All 50 Jugheads juggled together along club-based lines with intermittent solos of our top performers. That year also began my director’s cold opener, preceding “Rock This Town” by introducing JJ’s 1-5 as Jesse Ventura, Rod Serling, Jed Clampett, Gandalf, and Elwood Blues.

In addition to our cold and grand openers, JJ1 saw Wendy greatly upgrade my vision of an awards ceremony set to Rudy music as seen in ‘96 & ‘97. With the help of parent volunteer Scott Harr, she took portraits of each Jughead, typed in my awards, and created a presentation (including group shots and candids) underscored by “Rudy: Main Title” by Jerry Goldsmith and “Stay Gold” by Stevie Wonder. This solved my emotional inability to read the awards live, and even adults with no Jugheads in JJ1 cited the Slide Show as a highlight.

I have tried to instill patriotism in my Jugheads from the start, before it was either cool or controversial. I choreographed “The Stars and Stripes Forever!” for The Performance Team in JJ1 which we took to the MN State Fair Amateur Talent Contest Semi-Finals. I repeated that routine in the wake of 9/11 with JJ4’s re-named Ultimate Club. (FYI: P.T. in JJ’s 1-3 was audition-based; U.C. is standards-based.)

In 2000, I formed my first SLT to help plan the show. The SLT felt strongly to trace our new-and-improved show’s numerical name to our JH independence, not to our trilogy of W.G. shows. Hence, Juggle Jam 2000 (aka JJ2) graced two evenings that May, wherein we had 3rd graders for the first time. It wasn’t until JJ3 that I finally moved our shows to a Fri.-Sat. night tandem, less concerned with families who had cabin conflicts or other seasonal duties. As far as rosters, we jumped to 70 kids in JJ3, 100 in JJ4, and 120 Jugheads in JJ5!

An especially heart-warming aspect of those early Juggle Jam years was the number of kids who started with me as Wise Guys and continued several years as Jugheads, steadily expanding our age range: 9th, 10th, 11th. Next month, I’ll feature the joy of running the gamut of high school, fueled by hearty rosters, international awards, persistently involved parents, and the depth of our members’ commitment, fulfilling my calling and dream of self-employed, mentor-based youth work.

Running with Rudy and the Godfather