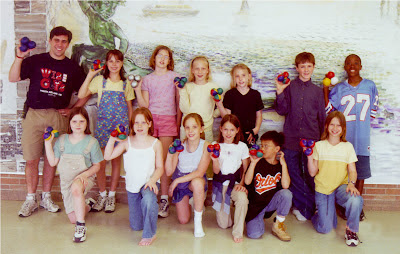 In my summer column, I described how God called me away from my planned vocation in talk radio and to the unlikely career of older child care manager, which led to the one-of-a-kind business that I’ve now run for 14 years after leaving Wise Guys in 1998.  But whether going to Wolf Ridge with the Wise Guys, IJA with the Jugheads, or any myriad of experiences in between, youth work has been the calling that ties together the last 20 years, three months, and 11 days of my career.

I’ve had interpersonal fulfillment in youth work too vast to even summarize here, but suffice it to say that my direct experience of making a difference in (many) kids’ lives, and the amazing support from the parents over the years, are major factors keeping me going.  I realize that 20 years really isn’t a big deal from the perspective of a classroom teacher; I respect that profession greatly, and I don’t know that I could have kept up with either those early hours or the perpetual “home-work” had I pursued my thought of teaching high school English.  However, as my job more closely resembles a youth pastor than a teacher, and since the average youth pastor reputedly only lasts about 3-5 years, 20 years is a long haul indeed!

Given my career origins in child care management, I must admit that the term “juggling coach” has always been a little uncomfortable for me, since I have neither formal training nor can I match the skills of Ultimate Club (let alone my coaching staff!).  However, by God’s grace, I do consider myself a “life coach,” and I can think of no greater joy than to comprehensively influence and guide others who seek, or at least are open to, mentorship.

Don’t get me wrong: I’ve had real desires—and real attempts—to change my vocation since 1992, but I’ve been met with closed doors.  Even when I hired Scott in ‘07, I dreamed of pulling back more and more in order to try out new sidelines.  However, even if my technical skills are lacking and my ego has longed for other forms of talent-based accolades, my passion for youth work has had a 2nd (or 20th?) wind in the last couple of years, and contentment is now more common than elusive for me.

So, I can say after 20 years that despite all of the world-class accolades this company has garnered, juggling is still just a tool—a means to an end—toward true youth development.

Developing Youth Through Juggling Since 1994,