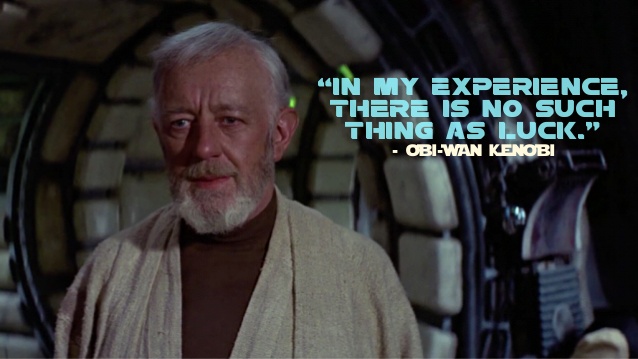 I don’t believe in luck. Luck is a superstitious notion that somehow “the Universe” or “random chance” (over millions of years, I might add) is determinant of one’s success, failure, and fate in life. First, the word “luck” is not ever mentioned in my set of Basic Instructions Before Leaving Earth (the Bible); second, I simply have an aversion to trusting something as crucial as my well-being, joy, and eternal destination to random, impersonal chance.

Pop culture backs me up in a couple of ways. Despite the obvious overtones of Eastern Mysticism in “Star Wars,” I do appreciate the line of Obi-Wan Kenobi in “Episode IV: A New Hope” when he remarks to Han Solo, “In my experience there is no such thing as luck.” In the novel The Hobbit, Gandalf clarifies his own casual use of the term “luck” when recounting Bilbo’s adventures at the end: “Surely you don’t disbelieve the prophecies, because you had a hand in bringing them about yourself? You don’t really suppose, do you, that all your adventures and escapes were managed by mere luck, just for your sole benefit? You are a very fine person, Mr. Baggins, and I am very fond of you; but you are only quite a little fellow in a wide world after all!” So, whether science fiction or fantasy, even the illusion (or presumption) of “luck” yields to a higher purpose.

How much more, then, should anyone with history-based faiths such as Judaism and Christianity eschew using “luck,” even as a form of well-wishing? Whether for a specific event such as an athletic contest or a Juggle Jam performance, or for a long-term blessing at a graduation or for a big change in life, my term of choice is “Godspeed.” Both dictionary.com and my Merriam-Webster app trace that term’s origin to Middle English (either the 14th or 15th century) based on the phrase “God spede,” or “God prosper you.” Interestingly, our ubiquitous parting phrase, “good-bye,” didn’t originate until the 16th century but has a very similar meaning: “God be with ye.”

Why does this matter? Well, for me, I’m so very grateful that I’m not sovereign over my own life. True, I admit that I’m somewhat of a control freak when it comes to handling my resources of time, treasure, and talents. However, that’s stewardship, not sovereignty. I believe that God is sovereign over my life, which means I don’t have to “trust to luck;” I trust in the LORD. So, whether it’s the challenge of directing my 22nd annual juggling show (don’t forget we had three spring shows in the 90’s as the Wise Guys!), mourning with those who mourn (due to deaths or cancer diagnoses), or even celebrating small victories that are nothing to the world but could be the world to a child, I’ll use “Godspeed” as a practical prayer for any given person’s endeavor or struggle. And in this groaning lifetime which yearns for redemption, I’ll also say “good-bye,” for we all desperately need Him so very much.