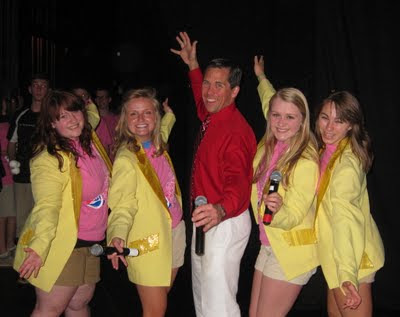 As an all-weather fan of the Minnesota Vikings, I find it an interesting stat that in the average NFL game, the players are only active on the field for about 15-20 minutes for the three-hour game.  Of course, this doesn’t include timeouts, half time, or commercial breaks, but it also doesn’t include when a running play is stopped yet the clock keeps running.  As is common knowledge, NFL players earn a lot of money for this relatively brief amount of action, but just think of the thousands of hours of training it takes to even last that long in one NFL game: weights, nutrition, team meetings, training camp, travel, and always striving for a better tackle, faster speed, or better read on the opponents’ strategy.

An odd topic for my annual post-JJ column?  On the contrary: it occured to me just a week before JJ13 that the average Jughead only spends about 8-10 minutes on stage during our 2.5+ hour show.  “Rock This Town,” a club vignette, a slide show appearance, “Reach”…that’s it.  But in my estimation, no one can truly quantify the efforts of the average Jughead to actually get to the JJ stage (physical skills, social growth, courage, commitment), nor can anyone quantify what those “10 minutes of fame” (or the journey thereto) does for the heart of the average Jughead.

C.S. Lewis wrote, “There are no ordinary people. You have never met a mere mortal.”  Similarly, this company celebrates each child whether as a star or as an average member (but to paraphrase Lewis, “I’ve never met an average Jughead.”).  May the blessings of this month follow each Jughead for the rest of their lives.

The Ministry of Being There

Juggling: A Conduit for Character-Building