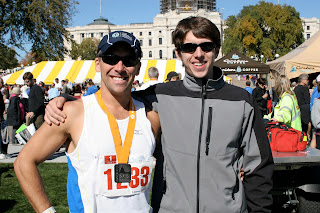 Distance running has represented a significant portion of my daily life and well-being since 2007 (and on-and-off since ‘85), and few athletic endeavors better epitomize goal-setting than the marathon.  I’ve run five marathons in the past two years.  For the middle three races, I tried my utmost to break 3:21 and achieve a Boston Qualifer (BQ).  During each of those attempts, I not only fell short, I fell WAY short: by 37, 57, and 78 minutes, to be exact.  By contrast, my goal for Twin Cities ‘10 was to simply beat 3:45.  My resulting 3:42 on Oct. 3 was strong and consistent, and proved a better experience.  Having failed multiple times and then finally adjusted my goal for a BQ, the blessing is that I’m reminded about true goal of my running: character over qualifying.

During and after my first serious BQ attempts in ‘96 (3:23) and ‘04 (3:34), I over-trained, got injured, quit running, and gained 40 pounds—twice.  Sure, I gave it my all, but I gave it too much, winding up losing more than I had gained through the actual accomplishment. Now that I’m not as young and not as unwise, my race-day results are not as lofty, but my major goals are intact.  I like to keep lists, and I have a Top Five List of why I prioritize fitness.  I steward my body for my: 1) God; 2) marriage; 3) career; 4) quality of life (daily function); and 5) quantity of life (longetivity).  If I didn’t have this list and the guidance of these primary goals, I’d be tempted to give up after every disappointment involving an unmet secondary goal (i.e., the ego rush of a fast(er) time to impress people).  This list also kept me balanced through my more recent failed BQ attempts.

I’m both a romantic and a realist.  On the one hand, movies like Rudy inspire me, seeing a man daring to dream beyond logic and counsel.  On the other hand, sometimes the most inspirational stories involve lives whose consistent faithfulness and perseverance overcome less dramactic but more effective goals in the long run (no pun intended).  I’ll continue running, but it’ll be my Top 5 List, not a BQ, that will drive me across the finish line every day.  That’s precisely why character development at JUGHEADS always trumps medals, awards, and other temporal forms of prestige.

The Importance and Proper Use of Words: Good Luck vs. Godspeed